. . .Actions taken by the ELCA in the past year have demonstrated that it is a church seeking to welcome the gifts of transgender people and ministry leaders. . .

Who are America’s Transgender Clergy?

. . .The Evangelical Lutheran Church in America (ELCA) implicitly recognized transgender persons in 2009 in their social statement on human sexuality. . .

​‘You Touch Me and Set Me on Fire’: Student Performs in Drag in ELCA’s Luther Seminary Chapel

. . .A student at Luther Seminary in Minnesota, which is stated to be the largest seminary of the apostate Evangelical Lutheran Church in America (ELCA), recently performed in drag in the Olson Campus Center chapel as part of the annual “Lip Sync Battle” held at the location. . .

. . .the first known transgender Latina to serve as a pastor within the 4 million-strong Evangelical Lutheran Church in America. . .

. . .Garcia, a transgender Latina woman who turns 60 next month, at a Saturday ceremony at Christ the Servant Lutheran Church in Louisville took advantage of the ELCA’s 2009 decision to allow transgender people and people in same-sex relationships into its pastoral ranks. . .

More Information on the ELCA and Transgenders

Blogs and articles from the our blog page that deal with 'Transgender' people, issues and policies in the Evangelical Lutheran Church in America.

. . .Party with your favorite drag queens at this Halloween fundraiser for Drag Queen Story Hour! . .

'Why can't I be a girl at school?' A Mount Horeb family's private journey becomes a public education about transgenderism

. . .“I don’t understand transgender itself, but I do have a wonderful family with a wonderful little girl who has blossomed since she acknowledged to everybody that she is a little girl,” said the Rev. Kelli Fisher of Perry Lutheran Church ELCA. . .

. . .She was prayed over and blessed by an assemblage of theologically aligned ELCA ordained ministers, rejoicing as they laid hands. . .

. . .weeks ago “We Talk. We Listen.” featured a post by River Needham​ on transgender identity and the distinct issues their community faces. We are now continuing this discussion on Christianity and queerness with a post by Rev. Megan Rohrer​. . .

. . .pictures contained in this Facebook post by the ELCA's Rocky Mountain Synod has at least 2 other transgender persons pictured, one being ELCA pastor Megan Rohrer and the other, seminary student Nicole Garcia. Also included in the pictures are controversial ELCA pastor Nadia Bolz-Weber and ELCA bishop of the Rocky Mountain Synod. . .

. . .Garcia found the Evangelical Lutheran Church of America before they decided to allow transgender people and people in same-sex relationships to become pastors. . .

ELCA Church Has Study on Merits of Transgenderism

. . .“Our transgender and Christian forum today was crowded and incredible. Lots to ponder, including the comparison between being born again and transitioning, and in general how much transition is tied into Christian faith. Amazing morning!” . .

. . .the pastor announced to the attendees of Grace Lutheran Church in Miami Springs that she is a transgender woman. . .

. . .Last year, Luther Seminary invited Hartke, who has written a book on transgender Christians, to return to campus as a guest speaker in chapel. “I got to preach on the story of Jesus raising Lazarus, the idea of coming out and being unbound. And there was a really good reaction to that,”. . .

Some Christians who have long been members of the Evangelical Lutheran Church of America (ELCA), have watched in horror as their denomination has fallen to the schemes of Satan. Some have left in disgust. But for others, the Left-leaning progressive theology suits them fine, as long as there’s only the fun parts of the Bible to contend with. . .

. . .In the Netherlands, a country with a long history of LGBT acceptance and tolerance, the levels of mental illness in “gay” men remain higher than among heterosexuals. In Sweden, even those in a same-sex marriage still experience higher rates of suicide than those in an opposite-sex marriage. And 46% of trans women attempt suicide. . .

. . .The bill prohibits transgender girls and women from competing in girl’s and women’s athletic competitions. . .

. . .It’s hard to believe that a seminary professor can claim that cross dressing is a godly thing to do.  Maybe Mr. Lose’s next article will be “Doing Heroin for the Gospel” or “Aborting Babies for the Gospel.”. .

. . .When the Bishop is visiting your place of Worship, please provide a single stall bathroom or family restroom for the Bishop and Dominique. As many places of worship may not have these accommodations permanently built, we recommend putting an “all gender” sign up one of the bathroom signs to create an inclusive space during the Bishop’s visit. . .

. . .from the halls of the Lutheran School of Theology at Chicago to Holden Village to his call in New York state, Andrew is extravagant with his energy, sincerity, and enormous heart. Since coming out as trans a little over one year ago – barely one year into his first call – Andrew has spoken openly and playfully about everything that he’s been going through. . .

N.C. Synod of Lutherans calls for repeal of House Bill 2

. . .Representing more than 200 Lutheran churches in the state, the N.C. synod meeting in Charlotte passed a resolution that also said HB2 discriminates against the LGBT community. . .

ELCA Pastor Raising His Son as a Transgender Girl

. . .My husband, Rev. Christopher Bruesehoff, was one of nearly 2,000 faith leaders to sign an amicus brief supporting Gavin Grimm and the rights of all transgender students, standing in solidarity with the trans community. . .

Pastor and Wife Allowed Transgender Child to Transition at Age 2: 'It's Who God Created Her to Be'

. . .Chris Bruesehoff, a pastor in the Evangelical Lutheran Church in America, and his wife Jamie recently told The Daily Mail that their son, Ben, is now their daughter, Rebekah. Now 10, Rebekah has been transitioning from a male to female since the age of two. . .

Pastor and Wife Let Son Identify as Girl Since Age 2, Prepping Him for Puberty Blockers

. . .​They could have concluded that their son’s suffering was the sign of a psychological problem. Instead, the pastor and his wife have embraced his gender confusion. Their church is part of the Evangelical Lutheran Church of America (ELCA), which embraces homosexual behavior. . .

. . .​Jamie then goes on to explain how the costs were covered: “and I’m extra thankful and proud to say that the insurance covering this procedure for my transgender daughter is provided to my husband through his employer… the church.⁣” . .

. . .After years of watching the transgender movement advance, Van Meter has concluded transgender activists want to keep buried the serious mental health issues within their community and have even influenced 18 state legislatures to pass laws making it illegal for therapists to explore with their child patients the reasons why they may be uncomfortable with their biological sex. . .

. . .Bruesehoff closed out the post by bashing President Donald Trump and GOP lawmakers for seemingly preventing and trying to prevent transgender procedures on minors, which she claims is tantamount to stopping “life-saving care.” . .

Church Drag Queen Bingo. A Tweet by Another Keynote Speaker at the 2018 ELCA Youth Gathering

Children at this church, the church of vastly popular Evangelical Lutheran Church in America  pastor/author Nadia Bolz-Weber, celebrate the season with a Drag Queen. What a wicked world and denomination. . .

Suggestive song and dance by man dressed as a woman is indicative of what is happening and being taught at this ELCA seminary.

. . ."The show brings in professional drag queens and kings from around the state of Iowa and also features students, faculty, and staff performers.". .

. . .​The ridiculousness of this bill is beyond comprehension for a party that claims to want to keep government out of the lives of individuals. . .

​Is This Still Christianity?

. . .At what point, though, does a religious expression cease to be Christian altogether?  Consider the “Transgender Day of Remembrance” Communion service at the ELCA’s Luther Seminary in St. Paul, Minnesota, on November 15. . .

A House for Fruitbombs and Saints

. . .His partner is a hair stylist who moonlights as the drag queen Fruitbomb...
One of Fruitbomb’s performances, a lip-sync of Radiohead’s “No Surprises” – in which the drag queen enacts staged abortions. . .

. . .ELCA affiliated Wartburg college in Waverly, Iowa is at it again.  The 6th Annual Drag Show will be held on Saturday, March 26 Neumann Auditorium. (see here)  "This year's theme is 'We Are Who We Are', celebrating everyone being themselves and enjoying life to the fullest!" . .

. . .students at Thiel College recently had their chance to participate in the ever-popular drag show during Thiel College’s gay “pride week.”  Thiel College, an ELCA school, promoted the drag show, along with other pride week activities, on their Facebook page. . .

Nadia's Church and a Drag Queen

Is that what the ELCA has become?  The church of Nadia Bolz-Weber, the most beloved pastor in the Evangelical Lutheran Church in America has an "Epiphany Pageant & Wizards Ball" that is hosted by a drag queen? . .

. . .An increasing number of individuals who identify as “gender non-binary” have emerged among the clerical ranks in mainline Protestant denominations. . .

AT THE CAPITOL: Faith leaders rally against transgender bathroom bills

. . .gathered on the Capitol steps Tuesday morning to denounce the transgender bathroom bills as attacks by radical religious politicians, blasphemous and a manifestation of hatred. . .

. . ., in a church filled with family, friends and more than 30 of my colleagues, I was ordained to the ministry of word and sacrament. . .

. . .His goal is to educate others about the transgender experience. . .

. . .THE ELCA puts an 11-year-old transgendered boy in front of 31,000 Lutheran youth, to explain how the church is a place where everybody can be themselves. That’s a dead church, but what does an alive church look like? What does life look like in a dead world? We analyze a hyper liberal ELCA sermon and find some comparisons with dying conservative churches. What do the dead and dying conservative churches have in common with the dead liberal churches? . .

. . .Leo Bancroft belongs to one of the most accepting mainline Christian denominations, the Evangelical Lutheran Church in America. . .

. . .This was the second vigil held at the church. Last year, Jon Rundquist, a trans-identifying seminary student with the Evangelical Lutheran Church in America, approached Fiscus about having an ecumenical service in honor of the day. . . 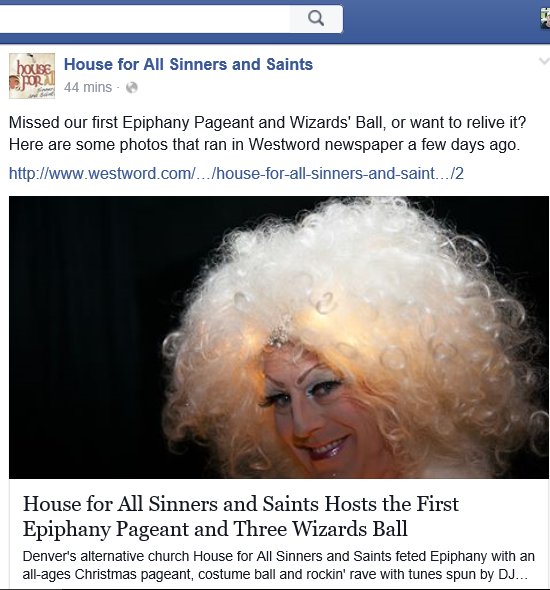 . . .Muhlenberg College posted article entitled, “This class is a drag — and students love it,” it says this about the course, “The students in ‘Of Kings and Queens’ have spent the first three-quarters of the semester reading, writing and analyzing, discussing the politics of gender and sexuality, and coming to understand drag as a cultural phenomenon. . .

Promoting Sin in the ELCA

. . .Ellie will give second Human is Human presentation at Fellowship Hall of St. Stephen Lutheran Church at 2198 N. Meridian Road. . .

​Somewhere Between Broken and Empty (by non-binary ELCA pastor)

(this non-binary ELCA pastor is an advocate in the ELCA. And received votes to be the synod bishop.) . . .a resolution I submitted demanded the removal of binary gender requirements for Synod events and committees. . .

More Information on the ELCA and Transgenderism

Articles from Exposing the ELCA's blog on the ELCA and transgenderism.