Three ELCA Synods asked the ELCA "to direct the Board of Pensions
to enact regulations that would limit payment for abortions to those exceptional cases where the life of the mother is threatened, where the pregnancy resulted from rape, incest, or where the embryo or fetus has lethal abnormalities incompatible with life."

But the Memorials Committee made a recommendation that was moved and seconded.  It said ". . .To decline to direct the Church Council of the ELCA to undertake at this time alteration of the terms of the medical plan for church workers that is
administered through the Board of Pensions."
The Assembly voted on the Memorials Committee recommendation.  It passed, Yes–815; No–125 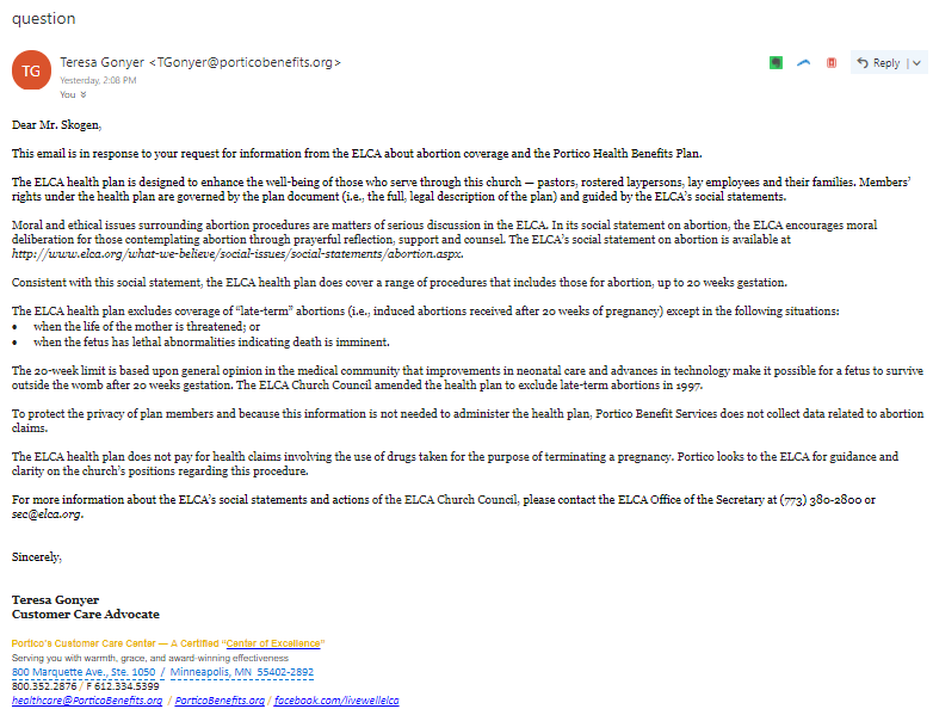 The ELCA's Abortion Policy: What Other Lutherans Have Said

. . . the letter that was written ELCA Presiding Bishop reveals the truth about the denomination's stance on abortion:

​"Amid the legislative challenges to access to abortion, we must remember that this church supports ongoing access to legal abortion as well as access to abortion services and reproductive health care that is not restricted by economic factors." (See here). . .

. . .I recommend you take a few minutes to read the linked documents. . . as they provide a clear picture of the ELCA’s true positions on abortion and the life of an unborn child. . .

Lutherans are for Life

. . . ELCA co-owns a Chicago hospital called Christ. It was there that nurse Jill Stanek discovered little victims of live-birth abortions who had been placed in the broom closet in cold metal pans-there to gasp out their young lives in the darkness. Jill held these suffering children as they died, praying for them and singing to them. For her pains, Jill was fired by the administrators of this hospital. . .

“Why are church groups denouncing budget cuts for reputedly hurting the poor but SILENT about public funding for Planned Parenthood and Medicaid abortions in D.C.?”

The ELCA and Abortion by JoAnna Wahlund

. . .In my 22 years as a faithful, churchgoing member of the ELCA, I could not remember hearing a Lutheran pastor preach a sermon on abortion. It was not an issue discussed in any of the three ELCA churches I’d attended up to that point in my life. Shortly thereafter I accessed online the ELCA’s Social Statement on Abortion (SSOA), and as I read it my faith in the ELCA was shaken to the core. . .

. . .Evangelical Lutheran Church In America's Social Statement On Abortion is an exercise in hypocrisy and nothing more than an attempt to please everyone involved except the unborn. . .

Is the ELCA Really the Kind of Church It Claims to Be?

. . .The following litany pairs quotes from the ELCA’s Social Message on Immigration, issued in November 1998, with the message conveyed by the ELCA’s Social Statement on Abortion and its employee health benefits plan, which will pay for any and all surgical abortion procedures performed during the first five months of the unborn child’s life, no questions asked. . .

Leaving the Culture of Death Behind

. . .After my pro-life conversion, I wanted to tell the world about the senseless slaughter. When I shared my story with our pastor, he kept badgering me about who would take care of the crack babies and who would adopt all these children. Eventually, my pastor reminded me that the ELCA has a pro-choice policy. . .

The March for Life and the Tale of Three Lutheran Churches

. . . (the ELCA) had never produced pro-life literature, joined any pro-life organizations, encouraged local congregations to observe the annual pro-life Sunday (this past year on January 20, right before the march), promoted participation in state or national marches, nor advocated for pro-life policies in any of its state or national advocacy offices. As far as the ELCA is concerned, there is dead silence on the matter. . .

. . .I wonder how anyone with a faith in Christ and a belief in the Bible could possibly be blind enough to read a letter like this and nod in agreement or click a link and donate money at Christmas to kill a baby. . .

. . .First, consider the composition of the Task Force. Strong prejudice must have been involved in selecting its members. The bias of selection worked powerfully in this case, and apparently will be a dominant factor in all social statements by the ELCA. . .

. . .Can we as a society really honor the lives of these beloved by unnecessarily restricting their access to abortion if they, in their best assessment of their own situation, understand it to be their only/best option? . .

. . .What would King say about the Religious Coalition for Reproductive Choice? The RCRC is filled with United Methodists, ELCA Lutherans, Episcopalians, Presbyterian USA, and other denominations that once supported truth and now support a woman’s right to kill her baby — claiming to do so in the name of equal rights. . .

Less Than Half of Mainline Protestant Pastors Preach About Abortion

. . .The survey also finds that half of Catholic priests report pro-life programs in their own parishes, while only 9 percent combined Mainline (2 percent) and Non-Mainline (7 percent) Protestant pastors report the same. . .

. . .Even when a religious institution has a clearly stated policy on abortion, church members may not always agree. . .

. . .Members of the Lutheran Campus Ministry, including Pastor Sarah Goettsch, second from left, hold signs in support of the Emma Goldman Clinic. . . (an abortion providing clinic)

Three pages from the Exposed Blog on the ELCA and abortion. At the bottom of each page go to the next page by clicking the "previous" link.

. . .female clergy from Iowa wrote a letter this week to publicly state their support of the abortion chain Planned Parenthood. . .

. . .“PLU’s middle name may be ‘Lutheran,’ but I sense the campus desires to divorce itself from traditional Christian values and pursue trendy social movements – like any typical American college campus.” . .

. . .the messages of the Office of Presiding Bishop, as currently listed, do not display a letter addressing the harm and tragedy of abortion in America. Frequent messages on behalf of refugees and the victims of violence appear, but there are no messages remembering the victims, both nascent and adult, of this killing industry, nor even a call for us to love and welcome the unborn into our homes and congregations through prayer, care, and the support of parents and struggling families. . .

. . .The letter blasts Iowa lawmakers who are trying to pass a bill prohibiting abortions from the moment an unborn baby’s heartbeat is detectable, about six weeks of pregnancy. . .

. . .Despite arguing that their faith and religious beliefs are irrelevant to abortion matters, the religious leaders had no problem calling the pro-life legislation “immoral” and “wrong.”. .

Raging Pro-Abortion Activists Behind the Pulpits

. . .For those inclined to doze during long sermons, or any being tricked by pastors who say one thing behind the pulpit and another out in the Public Square, the Lutheran, Episcopal and United Church of Christ women of clergy who wrote a letter praising Planned Parenthood. . .

Church Members Who Believe in Abortion, by Denomination

. . .the ELCA Church Council in November of 1995 essentially overruled it by considering all abortions as “medically necessary services” covered by the health plan. . .

. . .Bolz-Weber, who has had an abortion herself, holds that because God created man from dust, “that was the moment we had a living soul.” But citing God’s creation of the first man from dust is a very different creation process than God’s reproductive design. Plus, the Creation story does not end there. . .

. . .Why did you not cry out for the sake of justice and the most vulnerable among us, the unborn who are smitten, stricken, and afflicted like our rejected Jesus? . .

Letter by ELCA Rev. F. Allan Debelak. . .​as a member of NARAL Pro-Choice Ohio, I will call them deliberate acts of violence against women. I will call them acts of disrespect against responsible men and women who understand the importance for each of us to choose life that is not defined by others. . .

What can pro-choice people of faith do to support abortion rights?

Written by a queer ELCA seminarian who is an "abortion doula."

The ELCA’s Presiding Bishop Tiptoes through the Abortion Minefield

. . .At the end of May poor Bp. Eaton issued a letter on abortion, followed swiftly by a “correction.” Obviously she stepped over a line on the first try, which did fairly accurately represent the statement. . .

. . .The way to deal with abortion is not by punishing women or their medical providers through a surge of unconstitutional state laws that display a thrilling self-righteousness. . .

. . .A developing life in the womb doesn’t have an absolute “right” to be born. In cases of incest, rape or a threat to the mother (who may have other children to care for), the absolute “right to be born” might be questioned. . .

"​Supporting life is infinitely more complicated than outlawing abortion. As I much as I believe life to be infinitely sacred, the American pro-life movement forces me to remain pro-choice. For myself, for my children, for women everywhere. And, perhaps, for a God who knows that life is so complex as to require death to allow resurrection."

Babies Are Being Left To Die In America. President Trump Just Helped More Of Them Live

. . .The Sept. 25 order directs Health and Human Services Secretary Alex Azar to implement “the policy of the United States to recognize the human dignity and inherent worth of every newborn or other infant child, regardless of prematurity or disability, and to ensure for each child due protection under the law.” . .

Free Fliers/Posters about the ELCA and Abortion

1) The ELCA and Abortion: THE FACTS and 2) Dear ELCA Members: You have the right to know!